HISTORY OF THE BALLET COMPANY

The tradition of the NDM ballet ensemble has been made for a hundred years, making it one of the oldest ballet companies in the Czech Republic. During this time, eighteen renowned personalities have succeeded as the artistic director of the ballet company...

The first important ballet director was an Italian ballet master Achille Viscusi (1919–1923), who founded the first artistic dance company in Ostrava, and thanks to his origin, the company was given Italian basics of classical ballet that shaped Czech ballet for many years. An important event happened in the 1920s when the theatre hosted a German dancer Ami Schwaninger from Berlin and a choreographer professor Max Semmler, who staged The Legend of Joseph (1927) by Strauss on many European stages, including the our in Ostrava.

The ballet company went through the fundamental development with the ballet master Saša Machov (1929–1934) and Emerich Gabzdyl (1938–1970), with whom the ensemble experienced spectacular times in their dancing history for the next thirty years. It was Emerich Gabzdyl who was responsible for the very successful ballet The Tale of the Stone Flower by Sergei Prokofiev (1958). Prokofiev's ballets have always been an important part of the repertoire—Cinderella has been staged three times and Romeo and Juliet four times. Nevertheless, Peter Ilyich Tchaikovsky's ballets The Sleeping Beauty, The Nutcracker, and Swan Lake, which have been staged eight times in the entire history of the Ostrava ballet, have been equally popular. Alongside Emerich Gabzdyl, there was the second choreographer Pavel Šmok who staged nine ballets during his nearly four-year tenure, including Janáček's Lachian Dances (1962) and Gershwin's An American in Paris (1962). 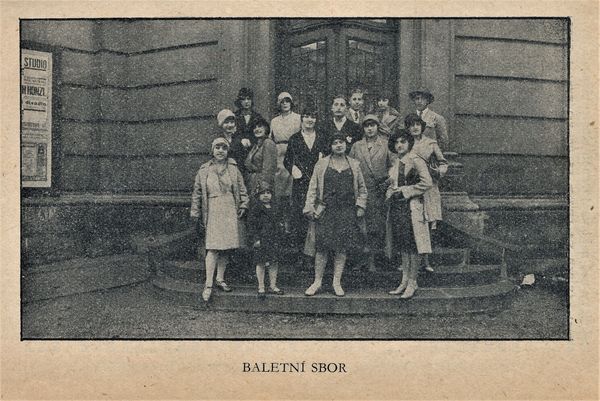 It was Albert Janíček who followed as the artistic director of ballet. He was engaged since 1946 and portrayed dozens of roles, mostly lyrical ones, over nearly thirty years. During his directorship (1972-1989), he established cooperation with today’s Latvian National Opera and Ballet in Riga, namely with an outstanding Latvian choreographer Alexandre Lemberg, who prepared the iconic productions Peer Gynt (1974), Antony and Cleopatra (1976), and Notre Dame de Paris (1981) in Ostrava. The Lemberg's guest appearances turned into a long-term collaboration with the theatre in Riga. The Janíček’s era is also associated with many excellent dancers such as Richard Böhm, Alice Kvasnicová, Libuše Kuklová, and Lída Ernst-Miencilová.

A significant event was when our theatre hosted a composer John Cage and a dancer and choreographer Merce Cunningham in former Czechoslovakia in the 1960s. Despite the political regime established in the country, both artists performed their avant-garde shows of American ballet firstly in Prague and then in Ostrava on 24 September 1964, during which the Ostrava audience was shown the latest trends as far as the performing arts were concerned in two performances.

In the 70s and 80s, there was a series of remarkable and successful choreographies staged in Ostrava—besides François Villon (1976), there were also Giselle (1984) and the children’s ballet Doctor Aybolit (1989) by Igor Morozov prepared by Josef Zajko, and Dark Blue World J. J. (1981) prepared by Zdeněk Prokeš.

In 1996, Igor Vejsada began his tenure as the artistic director of ballet, and he staged a few of his choreographies (The Beatles, 1997; Dances of Rudolph II, 1998; White Dreams, 1999, etc.). In addition, he was the one thanks to whom an Israeli choreographer Yehudit Arnon guest-starred in a Czech opening night of the production Purim or the Casting of Fate (2006) by a Hungarian choreographer William Fomin, which was also devoted to her as a symbolic gesture.

Each year and on a regular basis, the ballet company of the National Moravian-Silesian Theatre cooperates with highly appreciated home and foreign guest artists, tutors, and choreographers. Since the commencement of the 2013/2014 season, when Lenka Dřímalová has been appointed the artistic director of ballet, the ensemble has established cooperation with prominent foreign choreographers, including Youri Vámos (Hungary), Krzysztof Pastor (Poland), Itzik Galili (Israel), Paul Chalmer (Canada), Johan Inger (Sweden), and others. The repertoire has included unique choreographies by world-renowned authors such as Jiří Kylián, whose choreographies On an Overgrown Path, Falling Angels, and Wings of Wax have been staged since 2013. The international and young ballet ensemble is at a high level of interpretation and is currently becoming internationally sought-after for guest performances. In the season 2018/2019, the ensemble performed in the prestigious German theatre in Bonn and at the international Festival delle Nazioni in Città di Castello, Italy, for the first time.

The ensemble’s excellent artistic quality has been confirmed by seven Thalia Awards. In 2012, Lucie Skálová was awarded for the role of Sakura in the ballet The Last Samurai, and 6 other dancers were awarded by the jury for their lifetime achievements—these were Marta Drottnerová, Vlasta Pavelcová, Jaroslav Čejka, Věra Ždichyncová, Petr Zdeněk Koželuh, and a dancer and teacher Richard Böhm. In 2018, the Grand Prix for the overall winner at the VI. international ballet competition Pilsen 2018 obtained Sawa Shiratsuki, soloist of the NDM ballet company.